It's all been a bit experimental this week in the kitchen. Following my late afternoon walk, I had a fridge full of rosehips and blackberries. I started with rosehip syrup. Easy enough to make - rosehips, sugar and water - I used Hugh FW's recipe. It did require some straining though, and I don't have a jelly bag. Never mind. A stocking does an excellent job. 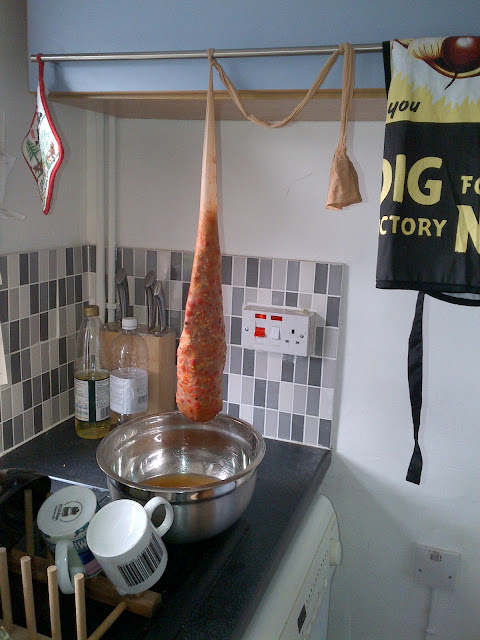 The stocking, alas, is no more. After the second straining, I just couldn't get the knot undone, so I cut it. I should have thought ahead and put a matchstick/end of a spoon through the knot. Doh!  I don't know if it would have been much use though. The little hairs inside rosehips are an irritant. They're used to make itching powder and can be quite nasty if you eat too many. And the idea of putting it through the washing machine and having subsequent loads come out covered in teeny hairs didn't appeal either. I have enough to contend with with the cat hair, thanks!

I should add that getting the stuff into the stocking did at first present a bit of a problem.  In the end I used my jelly mould.  I have a very handy one (99p from Asda) which has a lid both top and bottom. It means when you come to take the jelly out, you don't get the sucky action and the jelly slips out easily. For the purposes of straining syrup, (assuming you have such a handy mould), I took the lids off and stretched the stocking over the wide end, letting it hang through the smaller end, like so... 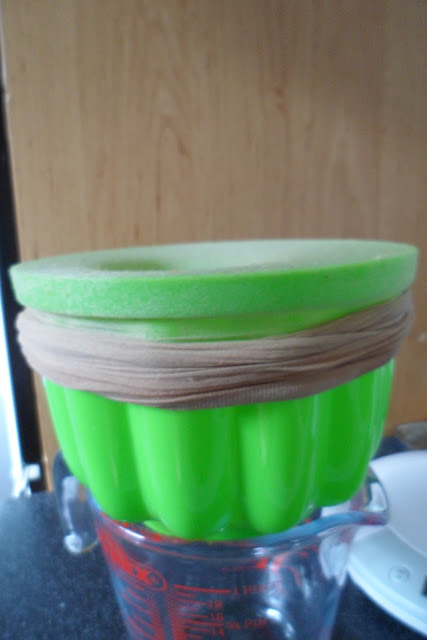 The upshot of all this straining and boiling was a syrup which is jolly nice (especially with a dash of gin).  I will be making more. Probably a spiced version for Christmas. And of course, it's very good for you with all that vitamin C.

Emboldened by my syrup success, I decided to have a crack at blackberry and apple jam. Let's just say, it wasn't quite as successful. A phonecall at an inopportune moment meant that I have a couple of jars with a 'caramelised' undertone. Never mind. It will all get eaten, I'm sure.

My biggest problem with jam-making is that I don't have a big pan. I would love a maslin pan, but I have nowhere to keep it. My little cottage is er... little. I have considered the various ways I might squeeze one in, but short of getting a huge one and keeping it in the bathroom as a tin bath, there's no hope. A tin bath does not appeal. I'm not *that* Yorkshire.

Anyway, making jam in a saucepan is not to be recommended. It gets rather hot and bubbly and my hob looked like a Jackson Pollock picture afterwards. 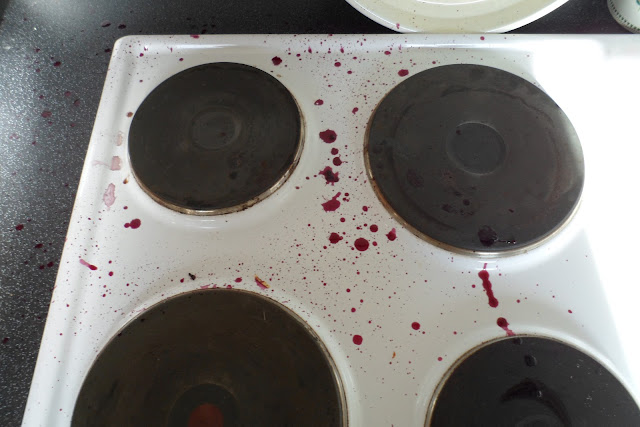 Not to be deterred, the following day I tried chutney.  In fact, it really started on the same day, as the tomatoes and onion had to be salted and left overnight. Compared to jam-making, chutneying is  delight. No obsessive thermometer-watching, no poking goop on a saucer, no mess.  That's right, no mess. Just bung it all in a pan and leave it to simmer merrily until it looks like slightly runny chutney. Put it in jars and it will thicken as it cools to normal chutney consistency. I cannot recommend it enough and it's a lot safer than jam to make in a saucepan.

I had to google a few recipes and botch something together that matched the contents of my cupboard. I ended up with:

Slice the onions and tomatoes and mix in a bowl with the salt. Cover and leave overnight. In the morning, drain but don't rinse.

Plonk it all in a pan and heat gently until all the sugar has dissolved.

Bring it to the boil and then leave to simmer until you have, like I said, a slightly runny chutney which is dark and glossy.  If you drawn a spoon across the bottom of the pan, there should be a slight delay while the mix oozes back to cover the bottom.

Pour into sterilised jars and seal.

Open one as soon as it's cool and scoff. 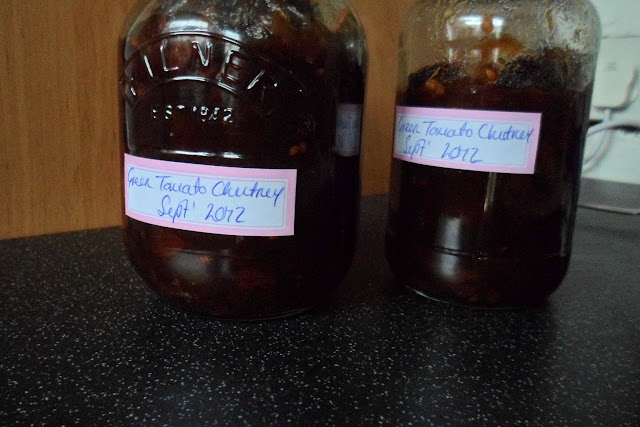 Admittedly, the cottage smelled like a cross between a chip shop and a Christmas market, but the end product is worth it.  I already have designs on a red onion one for Christmas. To be honest, I wish I'd chutneyed the blackberries!
Posted by Claire Davenport at 22:55

Email ThisBlogThis!Share to TwitterShare to FacebookShare to Pinterest
Labels: cooking