I used this stitch for a baby project earlier in the year and have been wanting to use it again.  Now that the season is on the turn and thoughts of all thing woolly are slowly making their way uppermost, I thought a scarf-y pattern might be nice.  Look out for that later in the week, first off, I'd like to show you the stitch itself, using a more photo-friendly yarn.  So, grab a hook and a ball of yarn and.... 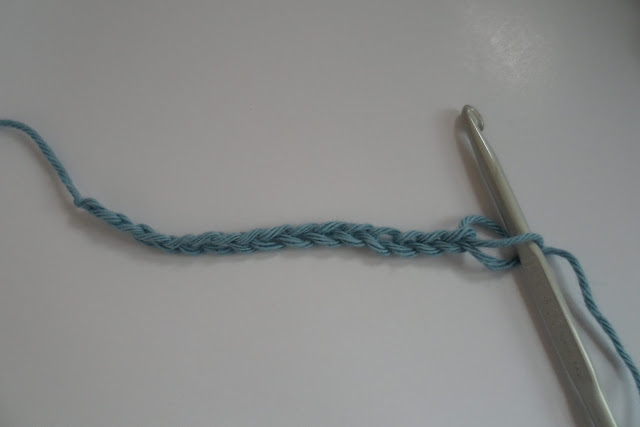 1. Chain an odd number of stitches. 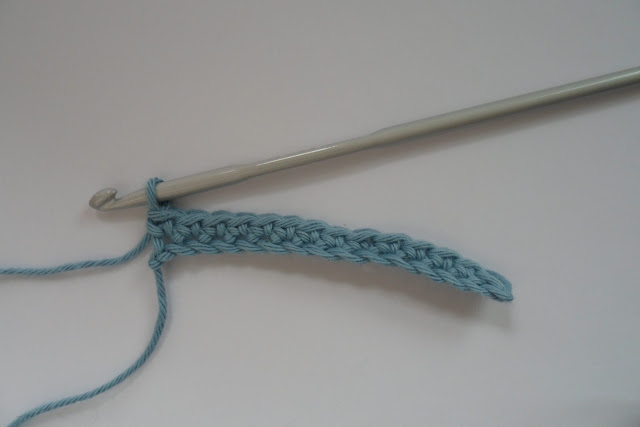 2. DC in second chain from the hook, then DC all the way along.  You should now have an even number of stitches.  When you get to the end of the row, chain three and turn your work. 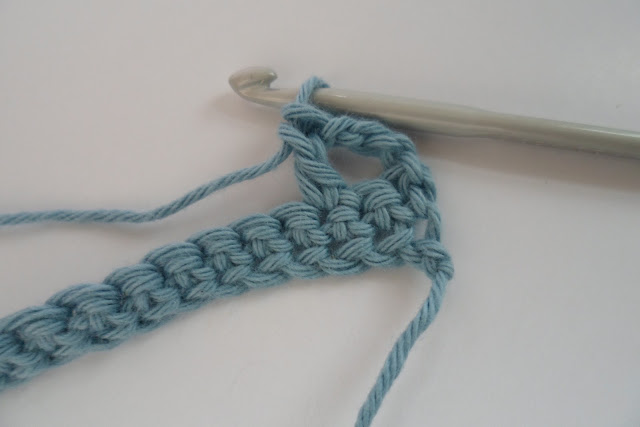 3. For the crossed treble rows, the foundation chain counts as the first stitch.  Make one TR in the third stitch along, as shown.  Of the first three stitches in the row, the first one is taken up with the chain, the second one has been skipped and the third one has a TR in it. 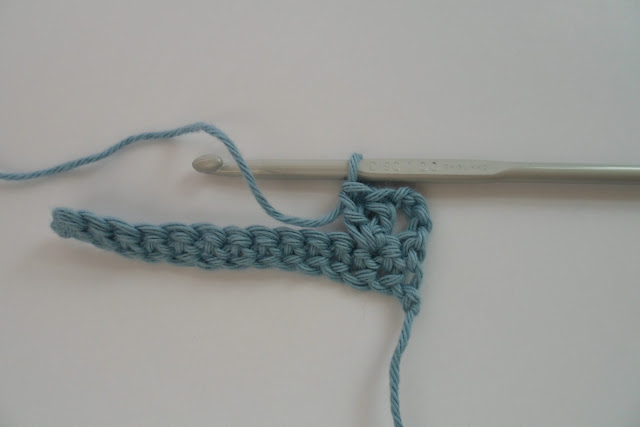 4. Now you're going to work your next stitch into that skipped DC.  So, YO as usual, go through the skipped stitch, YO, pull through and finish as you would normally.  The bottom half of the second treble crochet should be wrapped around the first treble crochet and you should have a sort of v-shaped thing going on. 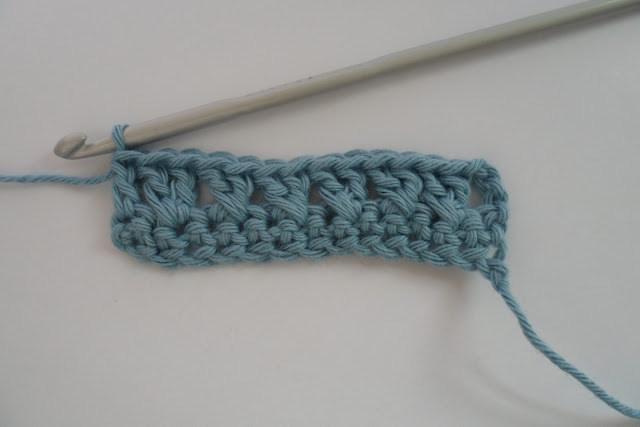 5. Repeat to the end of the row.  Remember to skip one DC, then go back and work the second treble crochet into that stitch.  When you start the next crossed pair, make sure you actually miss a stitch, it's quite easy to work the second treble into the same stitch as the first treble from the last pair (if that makes any sense...?).  When you get to the end of the row, you should have one DC left. Put a treble in it. 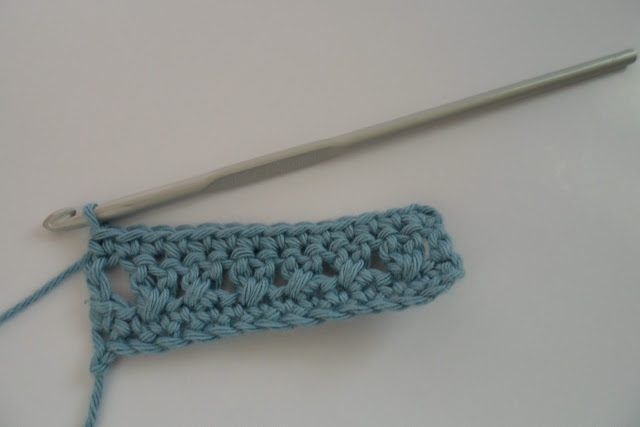 6. At the end of the row, chain one, DC in each stitch across.  For the DC row, the foundation chain does not count as the first stitch. 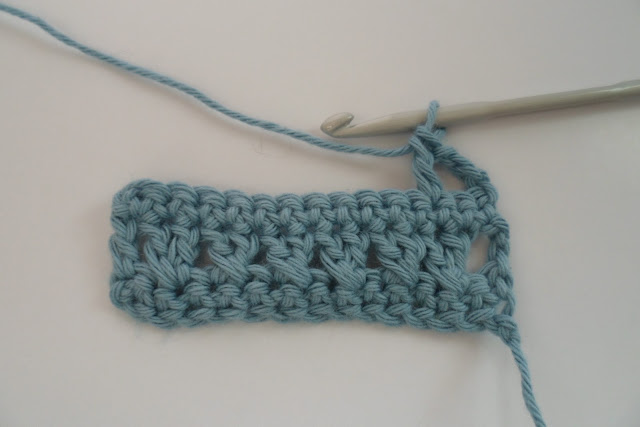 7. At the end of the DC row, chain three and work one treble crochet into the third chain from the end.  Continue as per 3-5. 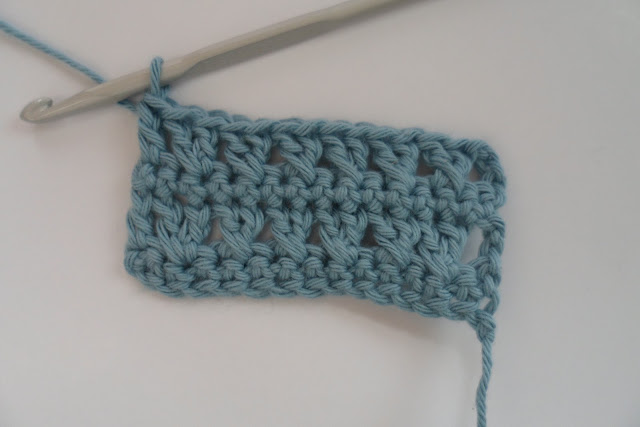 8. You should have something that looks a bit like this.  Repeat point 6. 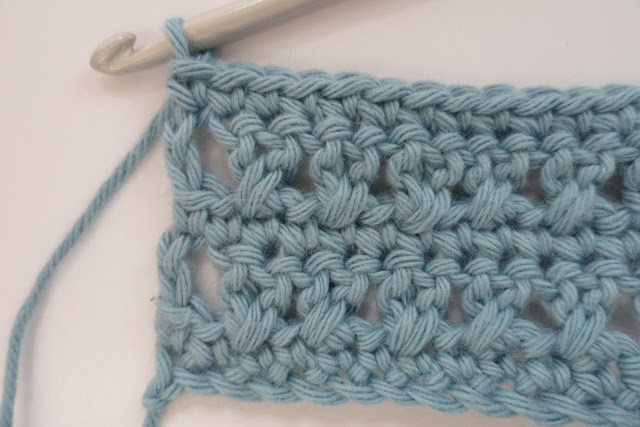 9. Keep alternating between the crossed trebles and the DC rows.  The right side of the fabric is the nobbley one, the side that faces you when you work the DC row.

The foundation chain on the treble rows always counts as the first stitch.
The foundation chain on the DC rows doesn't.
Make sure you miss a stitch when you start the next pair. It's sort of second nature not to, you'll have to try override your inner crochet autopilot.
End each row of crossed trebles with one treble in the last DC of the row below.

If you get stuck, just shout!
Posted by Claire Davenport at 10:00