Crikey, how did that happen? It's mid-December and I've yet to blog. Oops!

Well, I'm still waiting eagerly for snow.  I have resisted the urge to tape a ruler to the window. To be honest, we seem to be going through a patch of warmer, wetter weather and it feels a bit like it will NEVER snow. *sigh*

Anyway, whilst moping about hoping for snow, I've been twiddling with yarn and hook. I finally finished a cushion which has been hanging around for ages. You can see it in this post here from March. Honestly, nine months to finish a cushion which was essentially finished. Anyway, the reason it took so long was because I didn't like the closing. I was originally aiming for a fold-y over thing, like the two-year cushion (spot a theme here...?), but I just wasn't feeling it for this one. So I'd pick it up, crochet a bit, not like it, frog it, then put it down for another month or six.  Finally, I have finished it. I am happy with it. I like it. I might even struggle to list it and sell it. 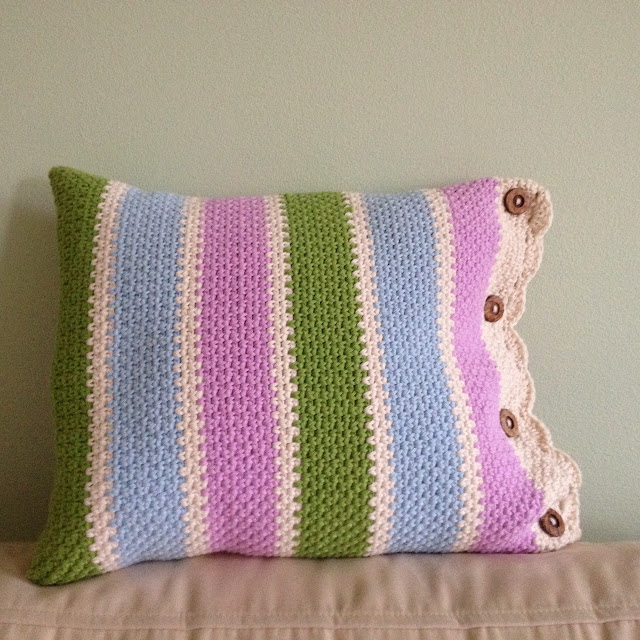 I need to pull together camera and cushion next time there's better light, as this is the only decent shot I have of it at the moment, but like I said, I like it.

I can't actually believe it took me so long to decide on four buttons. Shocking, isn't it?

And in other news, I have not put up my Christmas decorations. They'll go up on 24th December for 12 days only. I feel like the last woman in England not to be tripping over tinsel and blinded by the blinking of a thousand fairy lights, but there it is. Not that I'm not looking forward to Christmas (I have already started the Christmas eating...), it's just that I miss the anticipation. Christmas stuff appears so early in the shops these days, that it can all feel a bit tired and overcooked by the time Christmas actually comes around. Is it just me?
Posted by Claire Davenport at 18:24