You'll be forgiven for thinking I've written this post before. I have, kind of. But in my last mutant post, it was very nearly finished and now it is properly finished. 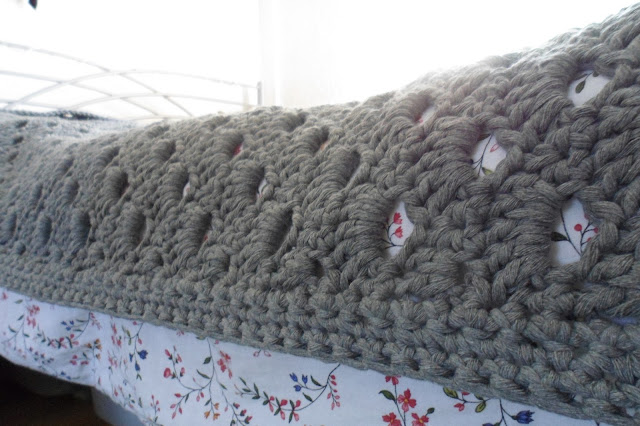 I did take full-blanket shots, but it's a bit early for good light in the bedroom and it looks a lot like it did in my last post about it. Also, someone was in the way... 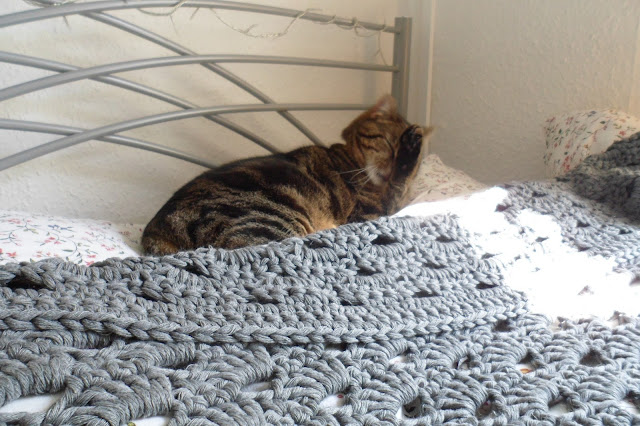 I've written about the challenges of bed-making before.

Anyway, it's finally done. It feels like it's been relatively quick but actually, it's been hanging around for a while. It certainly feels good to have finished it off properly.  You can see the progress posts here.

I lost count of the number of balls of yarn that went into it (40? 50?), so I tried to weigh it. I weighed the ripple blanket on my kitchen scales. No chance of doing that with this one. I tried to balance it on the bathroom scales to get a shot of it, but no dice: there's just too much of it. In the end, I weighed myself, then weighed myself with the blanket and took the first number from the second.

THIS BLANKET WEIGHS ALMOST A STONE!

And of course, I am writing this on what the met office expects to be the hottest day of the year so far.  Hmph!

I did think about maybe making some bed runners to take to Yarndale with me, but alas, this yarn is now discontinued. Gah! I have one ball left. What, I wonder, will it become...?
Posted by Claire Davenport at 10:31

Email ThisBlogThis!Share to TwitterShare to FacebookShare to Pinterest
Labels: Crochet, The Mutant