April? APRIL? I've only just undressed the Christmas tree! At least, that's what it feels like...

Anyway, efforts to live a slower life have continued through March, though given my alarm at finding myself in April, results have varied. As usual, you can catch up with other blogs taking part in this (usually with more success) on Christine's blog here.  I've skipped the headings I have nothing for.

I have been making a conscious effort to eat more fruit and veg as by the end of the winter, I do find it just too easy to fall into the all-carb-no-nutrient diet.  There have been some very healthy meals... 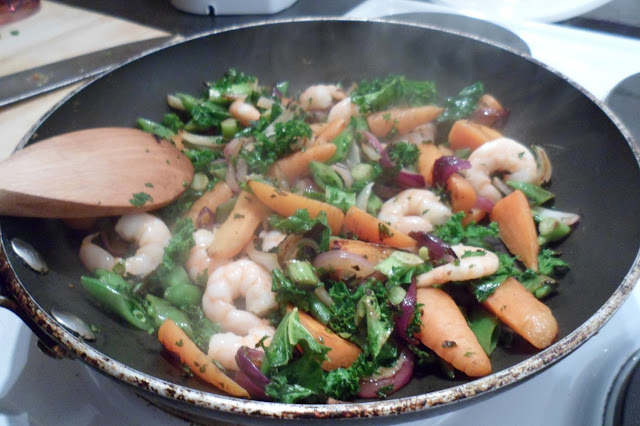 ...but my resolve was soon bent towards a more cakey direction.  Still, better than wasting three perfectly good bananas.

I am wholly unprepared and have decided to 'wing it' for the forseeable future.

Following on from the last point, I haven't actually replaced any cleaning things with green alternatives this month, but I am running low on just about everything. Next month will either be a Green Clean Bonanza, or slightly smelly.

Most garden plans were thwarted by a thick blanket of snow this month however we've had a few lighter, brighter days lately, so it's only a matter of time before I can get busy in the garden again. Hurrah!  I have at least sorted out some seeds and made loose plans for what might be planted in what.  In fact, it's been so dull and grey here, I took a photo of the sun when it did finally make an appearance. 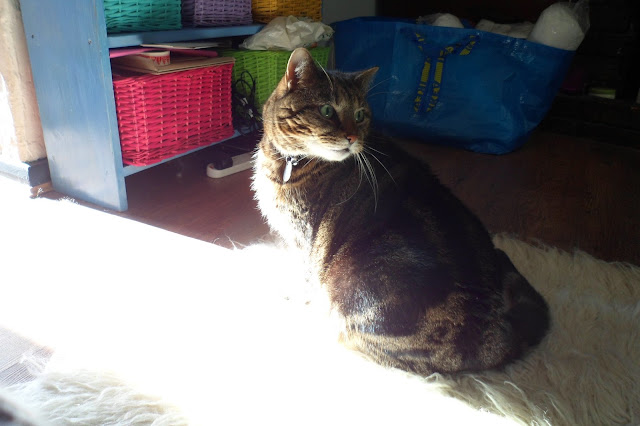 On the one warm spring-like day we had this month, I also reassessed the Plant Pot Situation and the Greenhouse Shelves Situation.  Conclusion: I need a bigger greenhouse.

There are plans afoot to move. Still. However plans are creeping forward little by little and there is the glimmer of a removal van on the horizon. Consequently, there have been a couple of trips to the charity shop. I seem to be some sort of coathanger queen as I rarely hand over a bag without at least half a dozen in there. Is it just me?

There has been more knitting - I finally cast off one of the scarves! I also picked up the other and got on with a bit of it. More about all that soon.  There has also been the usual constant stream of crochet. Squares for a little blanket, squares for a middle-y blanket and, quite unexpectedly, a cushion cover. 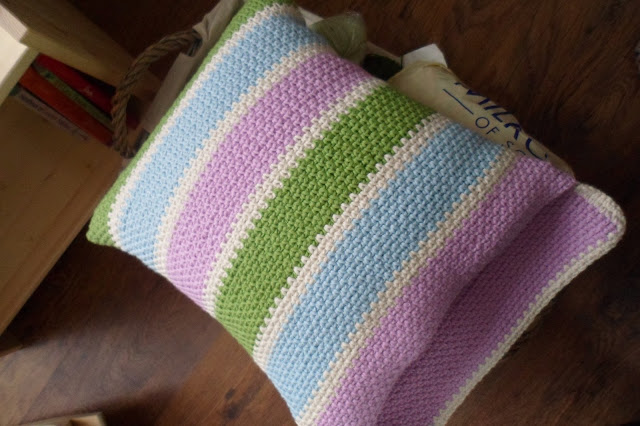 I just need to add buttons and poppers.

A friend and I went to the Knit and Stitch show at Olympia (Kensington, not Greece). We've been a few times now and have pretty much got it off to a fine art. So fine, I didn't buy any yarn. I know. It shocked me too.  I did pick up some nice fabrics though, but as they're for a present for another friend, I haven't been able to show them off on here. Sorry!  Another friend was thwarted by the unseasonable weather and so found himself at a loose end and came over for lunch. He's a bit tall.  My living room is a bit small.

It was lovely to see him, even if he left with a crick in his neck and a blunt force trauma or three...

Last month I said I would start running and make some Yarndale stock. Both of these things have happened,  though I'll admit, one more than the other. What can I say in my defence except that it was jolly cold outside?  I also zapped that lingering 3lb. Phew!  April resolutions?  Maybe just more running.

So there it is. March. Catching up with friends, baking and waiting for the sunshine. How was your month?

Posted by Claire Davenport at 13:52