This part of the year is always one of my favourites.  The anticipation of autumn when the heat of summer starts to dwindle and I can downgrade to factor 30 suncream as the 'season of mists' quietly creeps in and turns the world mellow.  However, autumn is still standing on the doorstep waiting to be let in.  Before I offer her a cup of tea and a sit down, let me tell you what I've been doing with August... 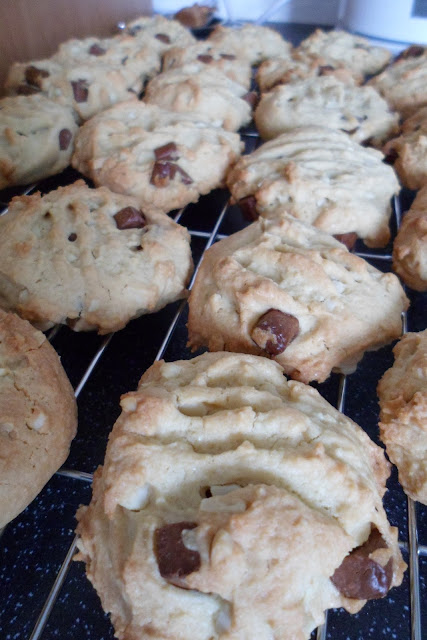 I'll admit, there hasn't been much baking going on this month.  I did find a new cookie recipe though, and it's a winner.  The mix didn't spread as much in the oven as I'd expected, so they were a bit cake-y in the middle.  I'll make them smaller next time...  The oven has had a very quiet month because most meals have been salads plucked straight from the pots outside. Hurrah!  I did however feel inspired by Heidi's popover recipe and made some goats cheese and caramelised red onion flavoured ones.  Delicious.  Alas, no photos.  I ate them.  All of them.  Pretty quickly too. *blush*

I've been making a real effort to turn off lights when I'm not in a room.  I had my first electric bill which tells me I'm on economy 7 (why couldn't they tell me that on the phone?).  As a result, the washing machine has become nocturnal.  The breadmaker will be following suit and things which need recharging are plugged in at bedtime and unplugged first thing.

As I said above, there has been a lot of salad-eating going on here.  All the radishes have now been hoovered up.  Quite a lot of rocket made it to the table until it got inspired by the Olympics and 'went a bit Usain'.  One day I had leafy, eat-y plants, the next they were about a foot taller and flowering. *sigh* 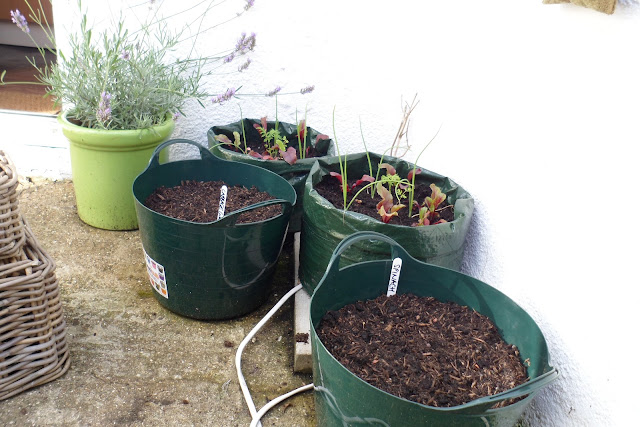 There's still quite a bit of beetroot dotted around the place, carrots and some salad onions which are coming on nicely and cabbage and spinach has been sown for some winter eating.  Calendula has also been sown for a head-start on spring and a last batch of radish and rocket has been put in for some late salad-eating (and because I like rocket stirred into risotto - add it just before serving). The latter was sown over the top of a load of spring bulbs, which makes me feel *very* organised. 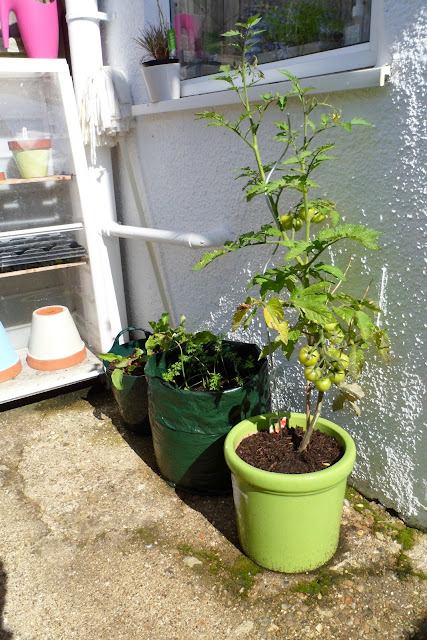 My tomato plant has produced about a dozen fruit, but all are remaining resolutely green.  At this rate, I'll be looking for recipes for the smallest batch of green tomato chutney in the world. Hmph! 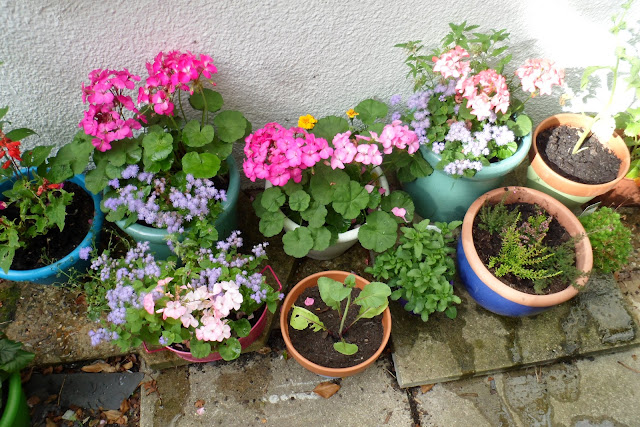 At the front of the cottage, the pots are blooming and even one of the clematis I bought in the early summer has managed to squeeze out a bloom. 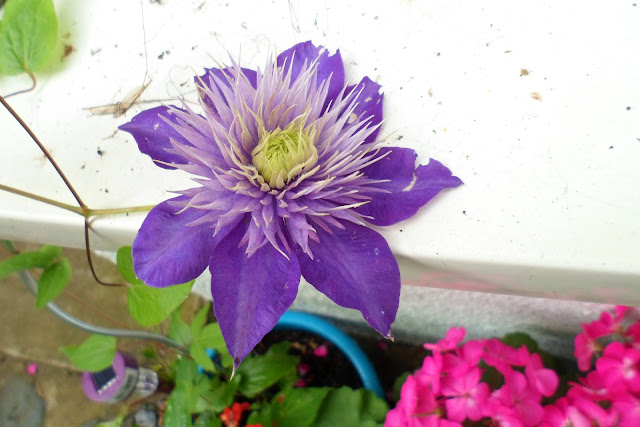 As usual, the crochet hooks have been hard at work.  I managed to get a small batch of baubles made up and I'll aim to keep adding to the stockpile in preparation for Christmas in Eidelweiss.  I've also been thinking about woolly things to stock and have finessed a handwarmer pattern in a cluster stitch which I hope to make more of... if I can bear all that sewing in! 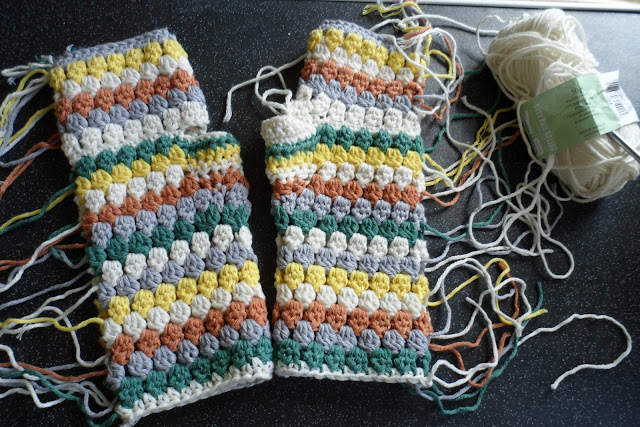 I also treated myself to some new terracotta pots as they were in the sale.  Then I treated myself to a couple of paint sample pots (£1 each and I've still got over half left of each - bargain!).  I do like terracotta, but I prefer it when it's aged - new terracotta always looks like it's had a bad spraytan.  Much better painted in softer shades of sky blue and light green.  The cream-coloured paint was a small pot of furniture touch-up paint that I had.  No idea which bit of furniture it was supposed to touch up, but I'm glad I've been able to repurpose it. 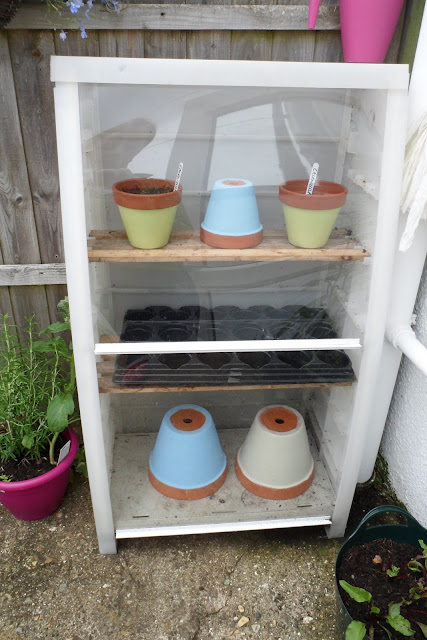 I just need to think of what to plant in each pot now.  My favourite is the planter with the bulbs and rocket in that I mentioned above.

Oh, and I'm still dithering over this blanket, but I think I'm slowly coming round to the idea of a solid pattern.

When I moved in June, most of my books were stored at The Beloved's.  I recently dug out a few of them and have been dipping in and out of them.  Particularly the RHS one about growing veg in small spaces and the 'Grow Your Own Drugs', which is not some sort of 'dealer's guide', but rather a nice collection of recipes for home remedies. 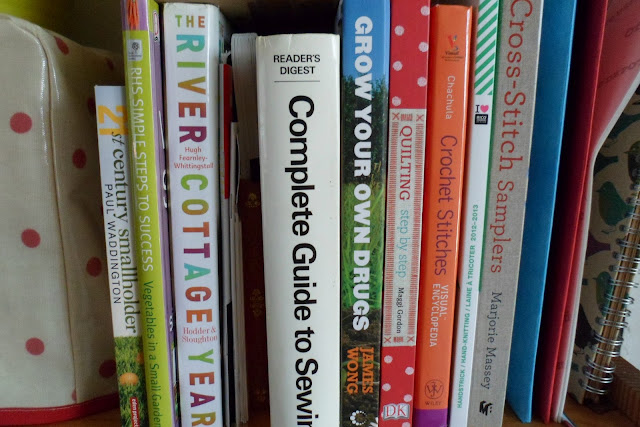 I've been reminding myself of what to be sure to have in stock for winter chills (cloves, lemons, honey, ginger, etc) and thinking about what and how to plant come the spring.

It's been a month for reaping the rewards of my frantic (if limited) efforts in the garden earlier in the summer.  We had a small barbecue early in the month and it was nice to be surrounded by flowering pots and see bits of veg poking through.  It was also good to catch up with friends and enjoy some nice relaxed weekends in the sun.

So, how was your month?

PS - You can find more Slow Living tales on this lovely blog :)
Posted by Claire Davenport at 10:28