This time last week The Beloved and I were speeding down to Shropshire for the weekend to visit the Ludlow Spring Festival which promised to be a feast of beer, bangers and bread.  It didn't disappoint.  There aren't nearly as many pictures to show you as I'd like, but it was a bit tricky to balance a camera with a beer in one hand and a hotdog in the other.

We bought tickets for the whole event: Friday evening, Saturday and Sunday, which was hosted in Ludlow Castle.  With hindsight, I think we'll just go for Friday night and Sunday in future.  Saturday was absolutely rammed! Friday evening was 'meet the brewer' evening with over a hundred real ales from local micro breweries on display. 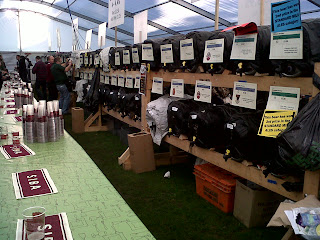 £9 bought you a tasting card for nine beers (a third of a pint for each beer) and half pint glass tankard.  Not bad, eh?  By the end of the evening, none of the bar staff were really bothered about where the one third line was on the tankard, so the beloved had a good number of half pints. 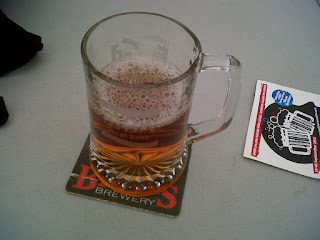 I graciously offered to drive us back to the B&B, so just tea for me.  I don't get on too well with the clutch in The Beloved's car, so it was good that he was beer-filled and happy.  It meant he didn't hear the sound of the gearbox screaming.  Well, almost...

As I said, Saturday was heaving, so we had a quick mooch through the classic car display (yes, that was in there too), a sit down to watch a couple of cooking demonstrations and a visit to the food stalls for lunch (and the beer tent for me - The Beloved wasn't so keen on letting me drive again and so decided he could live without more beer tasting).  Then we took ourselves off for a scramble up Clee Hill and a visit to some nearby friends.  The view from the top of Clee Hill is amazing.  It's not a long walk at all - the car park is almost at the summit, but it was just what we needed after such foodie indulgence. 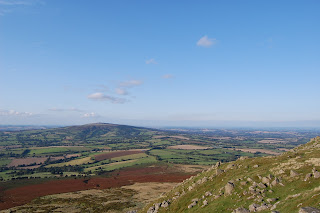 The following day, we went back to the festival to have a further mooch through the cars (there were even more of them by then) and pick up some goodies for lunch.  Then we headed off for a walk in Mortimer Forest where I was delighted to see proper native bluebells - most of the ones in the parks in London are Spanish or hybrids. 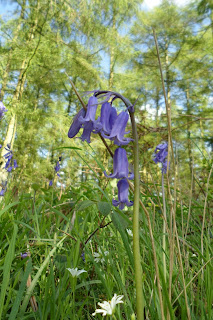 All in all, a lovely weekend.  If you get the chance to go to Ludlow for the food festival, do.  There's a HUGE food festival in the Autumn, this Spring festival is really the younger sibling, but if you like eating, a visit to Ludlow is a must!

Posted by Claire Davenport at 13:00