So, here's the second in the 'Folkster dedicated blog post' series.  This title was suggested by Bodkin and Bead in response to my wailing 'oh no!  someone already has a blog called Blossom of Snow!'  Anyhow, Bodkin and Bead makes some lovely stuff from some lovely fabrics - I'm quite fancying some of her buttons (see below for evidence of button fetish).

I was going to take you on a tour of the garden, but after the recent rain, everything's looking a little battered and bruised.  Instead, let's concentrate on the 'bloom' element.  I was listening to Gardeners' Question Time the other day (because I'm cool like that) and Bob Flowerdew recommended gently bending back the petals on a tulip for a really interesting effect.  Well, as there's a bunch sitting here next to me... 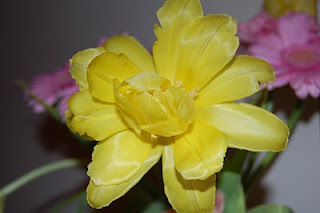 I think I agree with Bob, quite spectacular from a humble tulip.
Posted by Claire Davenport at 23:27

Email ThisBlogThis!Share to TwitterShare to FacebookShare to Pinterest
Labels: Flowers